CES 2014 Highlight including Steam and other awesome PC gaming tech 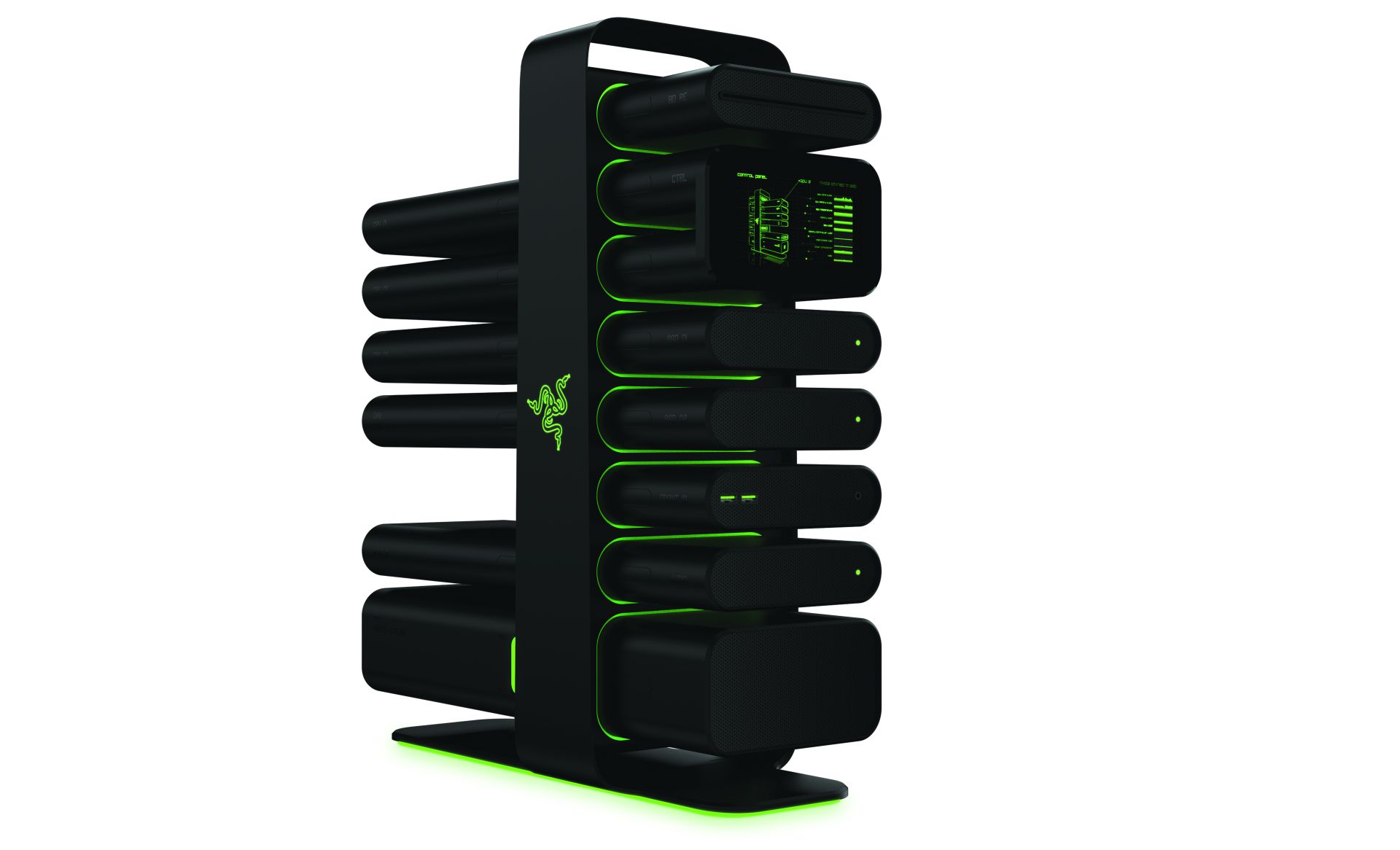 Every year CES shows off some awesome new consumer tech but being a gamer I mostly wanna see the PC gaming stuff and other cool nerdy stuff. This year at CES 2014 theres some amazing new stuff on show including the many Steam boxes, Nvidias Tegra K1, some amazing new keyboards from Corsair that look amazing, some evolutions in the field of home 3d printing and some cool stuff in the console gaming sector to really heat up the battle between the PlayStation 4 and Xbox One. Sadly theres also a lot of announcements that are designed more to sell business to business and are cool if you really look but the presentations are full of marketing info and study results and consumers don't really get excited, I'm looking at you Intel with the 14 min of my life you stole just to tell me Intel are now selling CPUs to car manufacturers to make some cool in car PC stuff. I love in car PCs but Intel's video seemed more to get car manufacturers to come buy from Intel and to me that is not what CES is about. To me it should be about getting consumers excited about stuff. So lets take a look at what got me most excited this year.

Most gamers have heard that Steam is making a Steam box tom compete with games consoles. Thats only half true. Its not directly to compete just to allow PC gaming in your living room. I have my reservations about this but I do think its going to be good for gaming as a whole. I'm concerned that the Steam machines may be one of the following

From this years CES is does appear that all 3 will be true with some Steam machines coming in at a few hundred dollars and some coming in at $6000 with a wide range inbetween. I don't think they are ever going to be as good as a proper gaming PC but I do think they will make PC gaming more accessible in the living room. I love PC gaming but sometimes I just want to relax on my sofa. Now while I have that option with my gaming PC now by using a wireless HDMI sender unit and a wireless controller for the mainstream user it needs to be as simple as a games console.

I don't expect to ever get a steam Machine (I may be surprised) but I can see myself installing Steam OS on my gaming PC and with it running on Linux it will see Microsoft get hit hard in its PC dominance and will finally force MS to do what its consumers want and scrap ideas consumers don't like rather than forcing them on us so their development money was not wasted.

Gabe reveals the new steam machines and has a chat with the press. This video gives a good overview of what the Steam Box is about.

Gamespot did a quick overview of the variation in specs in the Steam boxes. No technical details but if you want to see what Steam Machines are about hit play.

One reservation I have about Steam gaming in my living room is still having to use a mouse and keyboard which isn't as comfortable from he sofa. Steam has worked hard on the controller to minimise this.

Nvidia keep telling us that their new Tegra K1 can deliver Desktop class gaming on a tablet. I call BS on that one. The "Desktop" games they are referring to are games that barely stress a dedicated GPU. While I love the recent trend in gaming to return to focusing on gameplay over graphics theres definitely some marketing speak and spin here. That said its still brought Tablet gaming on in leaps and bounds so good job Nvidia.

From the comment at the end of this video this guy gets my award for most awesome company. I love companies where gaming is a passion and not just a way to make money. Much like the Steam box I doubt this will ever be better than a gaming PC but I'd also say its probably the coolest piece of tech at CES this year. At least for a PC gamer anyway.

Its no secret I love Corsair hardware but I have been using the same Logitech keyboard and mouse for 10 years. In its day my MX5000 was the pinnacle of precision. I didn't realise until recently that it had been so long. Partly I don't like some gaming gear because its not as comfortable as the stuff I have now. I work and play from my PC so I'm here 16-20 hours a day comfort has to be my first priority. Looking at some of the goodies from Corsair though a little voice in my head keeps saying I don't care if it has spikes on the keys and electrocutes my wrists this stuff is freaking awesome.

The more I look the more I'm considering dropping Logitech. I might have to hop over to Logitech's press centre and ask them to send me over some cool stuff to review before I start suffering from Corsair Fever.

Its always nice to see manufacturers supporting each other. I really love AMD's APUs for the work they are doing in raising the bar in entry level gaming.

So you thought the Wii brought a new level to realism and interactivity? How about the Kinect? Well both those can go off and cry in a corner. I'm not a massive FPS gamer but I want this so bad. Please, please make a swords addon so I can play Skyrim with it. This is one of the coolest tech products I've ever seen.

I have a massive collection of Retro games in my loft, my parents loft and my practical loft. Its just not pratical to keep 8 retro consoles plugged in to my TV alongside my modern consoles. Every now and then I'll have a gamers mid life crisis and pull one out for a weekend of retro fun but with this new console my gaming life can be complete and I can retro game any time I like.

I love the arguments the PS4 and Xbox One cause between fanboys and all the humour Sony seems to keep throwing out taking a dig at Microsoft.  With the launch of PlayStation Now it sees Sony moving away from physical consoles towards Cloud services. I don't like the idea of that happening to games consoles. I'd like them to stay in the world of physical tradeable assets but I'm sure many of you will love this. I just love it for the dig at MS.

Making Is Mainstream: Sam Jacoby of FormLabs at CES 2014

I've been thinking of getting a 3d printer for some time and every year they announce more and more models and better support for them and they get closed to the point I can buy one just for the fun of it. FormLabs are working to make using a 3d printer easier and easier so more and more people will be able to use them.

So they didn't reinvent it completely but they don't need to when they sell some of the best gaming cases out there.

It seems this year at CES listening to consumers is the general theme as Cooler Master are asking for feedback on prototypes.

I really dislike any hybrid laptop tablets, especially with touch screen. They keep trying to sell them to everyone when they are only really great for people like artists who want to draw by hand. While touch screen has its place I really see it having no place for a regular user or even most power users. That said this thing does look pretty cool. Those of you who do as the marketing people tell you and follow the trend towards TabTops then this is something you will love. I'll say this for Sony. I can't remember the last time I had a Sony laptop in for a repair that wasn't due to a user, like dropping it.

The TV industry in one that infuriates me. PC gamers have enjoyed over HD resolutions of 1600 lines for years before TV became HD. Then along came flat panel TVs and manufacturers realised now they were making the screens in the same place as monitors they could make more money by only selling 1080p displays. This resulted in above HD monitors slowly becoming an endangered species and when they are seen the price has continued to rise. Graphics cards are already 4k capable so isn't it about time PCs lead the trend again. I know plenty of PC gamers who would go 4K now if the monitors were available. Sadly it seems most manufacturers are waiting for TV and movie services to be ready before going all in with 4K. Finally though it looks like we are there, nearly.

So finally let me leave you with some highlight reels from CES.