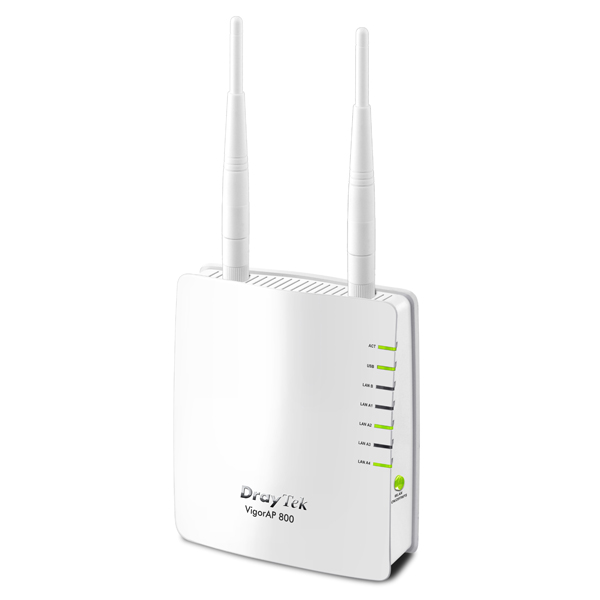 I've used a Draytek router before. It was amazingly good. It takes around 10 seconds to reboot, which if mind blowing. The Netgear WNR2200 I've also tested on the same connection is pathetic by comparison, and I'd consider the Netgear to be a decent router. The Netgear takes well over a minute to reboot. In fairness the Netgear is an entry level router and the Draytek is a top of the line model. The Draytek also had hugely impressive wireless range and speed and after some through testing of the WAN interface it trounced every other router I tested both in latency, throughput and reliability.

Recently I was called upon to bridge quite a large gap. I was told to use whichever method was most cost effective, wired or wireless. Running cables would really have cause a massive jump in cost and disruption as the only feasible route would have been to dig up the yard. Wireless it is then.

The gap in question was previously bridged by two Netgear DGN2000s which performed amazingly well. We were amazed to even get a signal with them let alone a good one. This amazement was short lived however as one of them stopped working around 18 months old closely followed by the other one. We replaced them both and all was well for a while until they died again. We replaced them yet again finding this time the wireless signal strength was not quite as good as it was before. In fact every standard AP we have tried in the mean time does not have the range required. This is no surprise. The location they are in is the complete opposite of ideal. There are several sources of interference, there is a huge amount of metalwork nearby and there is regularly a very large piece of machinery (or more) parked in the way.

Clearly these standard everyday access points are not up to the task so its time to break out something better. Having previously used Draytek's Routers and found their wireless range to be exceptional I tested a couple of their AP800 access points and found them to perform very well. These have two aerials both transmit and receive. I'll be replacing one of the aerials with the Draytek's ANT-2510 unidirectional aerial. This a 10dbi gain aerial which used SMA connectors like most other aerials. It is a square flat box and has a transmission arc of 56.9o both in the horizontal and vertical plane. Obviously I'm going to get it as close to perfectly aligned as is humanly possible for the best connection but almost 57o gives a reasonably easy setup. One last thing of note since this is most commonly mounted outside is that its IP65 rated and comes with a 1m extension cable. Draytek also sell 2m cables if you really need to mount the aerial away from the box but I'd avoid using additional cable unless you have to it saps some of your signal power and gives more chance of interference being picked up by something running near the cable. The AP800 itself is very well packaged. Inside the box you will find

The access point itself feels very well built. The aerial SMA connectors have rubber caps on them to protect them. There are pear shaped holes on the back for wall mounting. Lights are on the front and connectionst o the left side

The product gives a comparison of features of any of Draytek's other products. To me this isn't of a great deal of use as I prefer to get this info from Draytek's website so I'm always up to date. The CD contains the quick start guide, a full user manual, some useful support info and a utility which can be used to flash the firmware and one to view logs and other system events. Happily I won't need these since the access points came with the latest firmware, Version 1.0.3.1.

The quick start guide contains the default IP address of the access point. This is NOT on the bottom of the access point so even users who are experienced in setting this sort of thing up should at least glance over the guide. I know most me refuse to look at manuals but think of it as a tool to help you find the IP address of the router, rather than trying to guess it or use a tool to find it.

Its worth noting that you have to plug the AP into a network with the same subnet (192.168.1.x). In my case I plugged it into my router which for most people will have a subnet of 192.168.0.x. I then realised that on my network there are some IP address reservations and security settings that would cause problems if I changed the router IP. Nothing major but I decided it was easier to plug my laptop into the AP800 and manually configure my LAN port to be on the same subnet. This caused Windows to complain that I had limited or no connectivity and attempt to diagnose the problem. I cancelled this. I typed the AP800's default IP into chrome and up popped the login box.

The default username and password in this case is admin/admin. Don't forget to change it at the first chance you get. The password change option is under System Maintenance. Changing the password does not require a confirmation so take care when doing this or you will be doing a full factory reset before you have even begun.

At this point I decided it would be a good idea to break out the Vigor N65 addon module before I started to configure the access point. 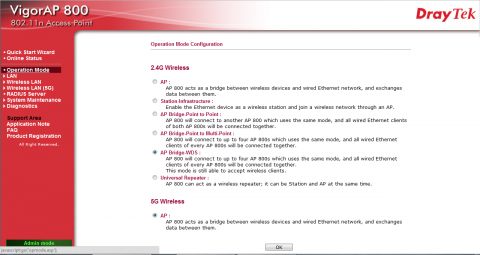 To  configure the AP800 I first went to Operation mode. This lets you select what you want to use it for. I selected AP Bridge WDS . Currently there is only going to be two of these but it will allow me to add more in the future without having to switch modes. It also allows the AP800 to still accept wireless clients.

The next step is to configure the AP800 to have an IP address that matches my subnet and wont conflict with any other AP800s I put on the network.  The AP800 actually has 2 LANs I only need one but I'm setting these up in my office LAN and they will be moved to a different LAN later. To make setup easier I've configured the IP address of LAN B to match my office subnet and I've changed the IP address of LAN A to match the device's target LAN subnet. I've changed the IP address to 192.168.x.220 and I'll change the second one later to 192.168.x.221. I've picked these IP addresses because they are obscure and I know they are free. Use any address you like. 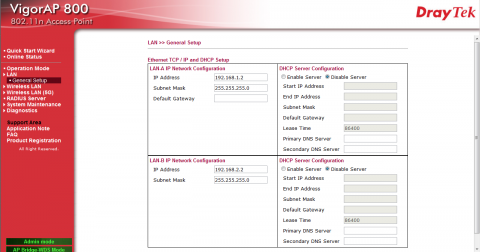 At this point its time to save the settings and swap access points. You'll notice I've not even looked at the wireless settings yet. Well I want to set the APs up so I can remove the custom IP address I setup earlier so I'm doing the IP address change first. Bear in mind if your doing the same thing then you will have to access them for setup from the IP address you setup for LAN B.

Onto wireless setup. There is separate setup for 2.4GHz and 5Ghz so if your using both you will have to set both up separately. The APs default configuration is to use mixed mode b+g+n and to use mixed WPA+WPA2/PSK so the default is fine for me. The access point allows you to setup four separate SSIDs each with their own security and selectively bond them to LAN A or LAN B. 5Ghz mode defaults to mixed mode a+n with no security so I'll e adding security to it. 5ghz also only allows 3 SSIDs, not that that's a problem. Security settings here should be familiar to anyone who has set this up before on another router/access point.

As for setting up the wireless bridging. This was a little infuriating. The access point tries to help you here. If you go into the AP discovery page and scan for access points you can select the one you want and then click an add button to add it to the WDS list. This will take you to the general settings page where the mac address will have been automatically filled and you just need to select a security type. My problem came in setting the phy mode. The default setting was CCK on both routers but for some reason the bridge did not work. I noticed on the WDS AP status page that each AP was listing the other's phy mode as HTMIX so I changed them both to HTMIX manually and then everything started working fine. I'm sure this is a firmware issue. Its only a minor issue from what is a very good access point. Now they are configured its time to test them out in the world and see how they handle connecting in a hostile environment.

We'll I'm very impressed after running a couple of tests. I've ran multiple high definition video streams across the gap and it ran fine without stuttering. I've also used the Wi-fi analyzer app for Android. Standing by each access point I tested the  wireless strength of each access points. The old access points wandered around the -95dbm range even on a clear day with no big machinery blocking the signal. This means the slightest issue which could affect signal strength and the signal was unusable. The system was plagued by dropouts. After fitting the new system with the uni-directional aerials I tested it again. Bear in mind we mounted the aerials 20 foot up and I was testing at ground level, not in direct line of sight as the aerials require. The signal strength was just over -70dbm which is just out of the green and an excellent result. I tested the throughput by transferring a few large files and timing the transfer. Unfortunately the transfer ran at what I suspect is the maximum of the rather feeble local network and the location of the hardware does not allow for easy access to plug some high performance hardware directly into the AP.  This is a little disappointing because I'd love to give them a full test but in any case being able to max out even a pretty poor wired connection over such a long distance in less than ideal conditions is very impressive. Should I get the opportunity to test them in better conditions I will post the results but that won't be happening in the immediate future.

Update 05/12/2012:  After running for 88 days without so much as a soft reboot I started seeing some stability issues with the wireless wridge function. The other functions still performed as expected.  To be fair though 3 months straight is an admirable uptime for any device. A soft reboot fixed the problem and I was able to carry out the soft reboot over the wireless bridge after a second attempt.